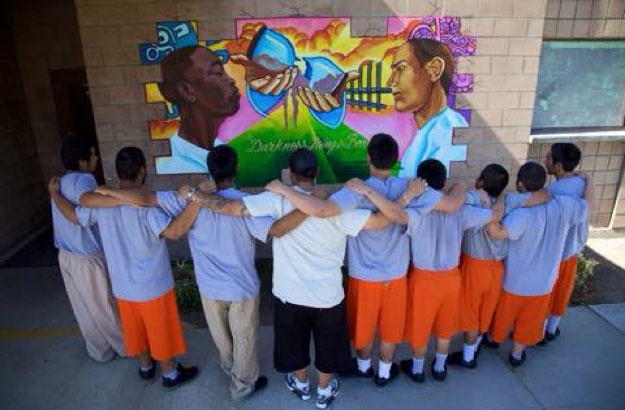 The Story of Jamie

Jamie* (not her real name) peers sidelong down the row of girls sitting at the rectangular folding table set up in the dingy gym. She reaches for the ginger ale I’ve poured. “Thank you,” she emits from deep inside. You can feel the post-performance calm that Subway sandwiches, potato chips, and cookies have induced in the group following the presentation of their original play.

“You guys believed in us. I know I have a problem with anger,
and I’m working on that,” she says.

60 minutes prior when I walked in, the energy of these eleven girls incarcerated at LA County Probation Camp Scott was headed toward entropy. Even though I knew better, I found myself stiffening at their glares, taunts, and fierceness. No wonder though. They were trying to get through the final rehearsal of the original play they wrote entirely themselves within the span of one week (just eleven and half hours). It’s a fair bet that most had never performed on stage or had any meaningful arts experience. Offering the suggestion that it was normal to be nervous was met with stock denial. Vulnerability is not an asset in lock down, and it was only moments before their peers would file into the gym to take their seats in front of the make-shift stage.

According to a 2015 report by the Human Rights Project for Girls, the Center on Poverty and Inequality at Georgetown Law, and the Ms. Foundation for Women, 80% of incarcerated girls are victims of sexual abuse or other physical violence. Firsthand experience and Unusual Suspects’ survey results indicate that most of our incarcerated participants, through no fault of their own, are failing in school, have an extreme lack of confidence and self-worth, and virtually no positive role models. Under the circumstances, it’s a wonder that these children are able to put any trust at all into a process that requires one to be completely vulnerable with no readily discernable reward.
As a founding member of the Arts for Incarcerated Youth Network (AIYN), The Unusual Suspects is currently expanding our services into more facilities of LA County Probation, infamously, the largest juvenile justice system in the world with 14 juvenile camps and 3 halls. Last summer for 6 weeks, in a partnership with LA County Probation, the LA County Arts Commission and The Children’s Defense Fund, Unusual Suspects and AIYN rotated through 6 camps, providing poetry, drumming, mural painting, creative writing, and theatre to 172 incarcerated teen boys and girls.

Like a sprout that takes root through a crack in the cement, these young people are able to find sustenance in the slightest encouragement. It’s what Jamie and Desiree said. It’s understanding deeply that you can change; that you belong; and finally, that you can be somebody.

The Unusual Suspects is a founding member of the Arts for Incarcerated Youth Network (AIYN), which came about organically through meetings over about two years convened by the Violence Prevention Coalition.

*The names have been changed to protect confidentiality.

A Farewell to Our Executive Director